THE EVIL DEAD FRANCHISE (IN 8 PARAGRAPHS) 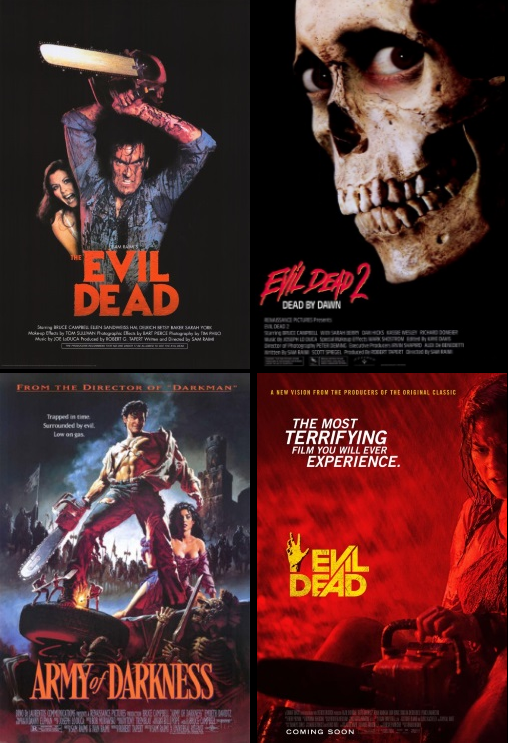 The first EVIL DEAD was a watershed moment in the history of independent horror films. A huge success on VHS (as well as one of the films targeted by the morality police in the Video Nasties witch hunt), THE EVIL DEAD helped prove the viability of small budget horror films to distributors, opening the flood gates for smaller, less high profile films that would have never seen distribution otherwise. It also birthed a new generation of DIY filmmakers in the process, each inspired by the ingenuity of first time filmmaker Sam Raimi. A high energy, high style film, THE EVIL DEAD is the perfect testament to the directorial abilities of Raimi and a great reminder that budgets sometimes really don’t matter as much as inventiveness. With less than 400k to make the film, Raimi’s homemade dollies (including the now famous ram-o-cam) and the gruesome cheap-o effects by Tom Sullivan proved that low budget doesn’t necessarily mean unwatchable. As a result of all the tricks and craft behind the scenes, THE EVIL DEAD feels much more alive than most horror films of the time.

A simple story involving a group of twenty-somethings unknowingly unleashing vicious demonic forces, THE EVIL DEAD is a graphically violent, unrelenting horror film full of nicely done shocks and more than a few gory sight gags. Unlike the other films in the franchise, THE EVIL DEAD is relatively humorless and unrelentingly bleak. Prefiguring Carpenter’s THE THING by a whole year, there’s an undercurrent of paranoia that runs through the narrative with people in an isolated environment becoming quickly and irreversibly possessed, preying upon your constant fear that at any second the shit is going to hit the fan. The finale is the only real weak piece in this otherwise glorious puzzle, coming off as a bit rushed. But that’s a minor nitpick. For 85 minutes, THE EVIL DEAD is a pitch perfect, terrifying horror film.

EVIL DEAD 2: DEAD BY DAWN isn’t really a direct sequel. It is basically a remake or a reboot. The first ten minutes or so retells the basic plot of the first film. After that, EVIL DEAD 2 becomes its own twisted beast. The first film ever referred to as “splatstick”, EVIL DEAD 2 is more Three Stooges than horror film. It doesn’t even try to be frightening. Every single scene here is hyperbolic and hyperactive. The sight gags come fast and furious, and Bruce Campbell, in the role that really made him a cult sensation, delivers some of the best physical comedy you’ll ever see in a movie about demonic possession. Whether it’s having a brawl with his own demon-possessed hand or flinging himself through the air, Campbell’s performance is what really kicks EVIL DEAD 2 into the stratosphere. He’s perfect here.

When people talk about the EVIL DEAD franchise, this is the film they are most likely to talk about and I understand why. The entire film is pure lunacy with iconic moments around every single corner. The film has been criticized as being too much insanity and too little mood. The precious few quiet moments the film has to offer are where the narrative happens but let's be honest, narrative isn’t top priority here. Carnage is. And EVIL DEAD 2 dishes it out with great aplomb. In fact, aside from THE TEXAS CHAINSAW MASSACRE 2, I'm struggling to think of another horror film from the 1980s that delivered this much bloody bullshit. It has entered the pop culture like few other horror films have, primarily because its status as a horror comedy makes it an easier pill to swallow. In a genre that felt more and more like sadistic punishment, EVIL DEAD 2 was a strange creature, a horror film you honestly had fun watching.

If the comedy of EVIL DEAD 2 was a departure from the roots of the franchise, ARMY OF DARKNESS was a total abandonment. No longer claustrophobic splatter comedy, the EVIL DEAD franchise was now an action adventure film series set in medieval times. Our hero Ash is left stranded in the past with nothing but his trusty chainsaw and shotgun to aid him in defending a kingdom from a horde of demons and Harryhausen-inspired skeleton armies, all led by Ash’s evil doppelganger (spawned from Ash’s own body, no less). While EVIL DEAD 2 contained all of Raimi’s now signature directorial moves (whip pans, comic book style close-ups, quick moving dolly shots, etc.), ARMY OF DARKNESS is largely free of personality. It feels more like a test run for Xena:Warrior Princess and Hercules, the two television programs Raimi would go on to produce in the mid-1990s.

This is my least favorite of the original trilogy. I simply don’t find the film funny. Most of the dialogue sounds like it was written with merchandise in mind (t-shirt style slogans run amok here) and the sight gags are less original than those in the previous films. Moving to a PG-13 rating meant the now familiar splatter flourishes are all but gone and the frightening possessed inhabitants of the cabin are replaced with cackling stop-motion baddies. Watching the movie today, the entire thing feels dated and clunky. The narrative meanders all the time, the effects are just awful and the ending promises a sequel that never came and was likely not going to be good anyway. While I will give Raimi kudos for having the balls to produce such a radical departure, ARMY OF DARKNESS is just not the EVIL DEAD I know and love.

The Fede Alvarez remake of the original EVIL DEAD is more of an effects reel than it is a movie. The narrative covers many of the bases the original EVIL DEAD did and even contains some direct visual references. But it lacks the personality of the original film. It lacks the clever visual construction and originality. It also lacks the scares. What we have instead is something that looks good but is dull, sounds good but is hollow and is filled with gruesome special effects that are fun to watch but ultimately don’t add up to anything more than a few gross-out shocks. While THE EVIL DEAD was certainly not a smart film, the idiotic behavior of the characters in this film puts virtually any slasher film to shame. To make matters worse, the possessed characters all sound like characters from a Rob Zombie directed remake of THE EXORCIST. Was the line “why don't you come down here so I can suck your cock, pretty boy?” really necessary? Is this what passes for horror these days?

The whole film teeters between torture porn and unintentional comedy. There are definitely some moments that are hard to watch (self-mutilation galore in this one) and I will admit to really liking some individual moments (like the raining blood finale) but overall I came away from this film feeling majorly underwhelmed. THE EVIL DEAD is not an untouchable masterpiece. A remake could have worked just fine. But like HATCHET and the films that tout their “old school horror” roots, the people making this film only seem to remember the blood and guts. They don’t seem to remember anything else and I’m here to tell you, the violence is NOT what made THE EVIL DEAD great. It wasn’t what made the second film great either. No, what made those films great were Sam Raimi and Bruce Campbell, two men with huge amounts of energy and personality. This film has neither. It’s just a routine, by-the-numbers horror film that doesn’t deserve to call itself EVIL DEAD.
Posted by David Grant at 11:18:00 PM
Email ThisBlogThis!Share to TwitterShare to FacebookShare to Pinterest
Labels: 31 Days of Horror, Army of Darkness, Evil Dead, Evil Dead 2 Dead by Dawn, The Evil Dead