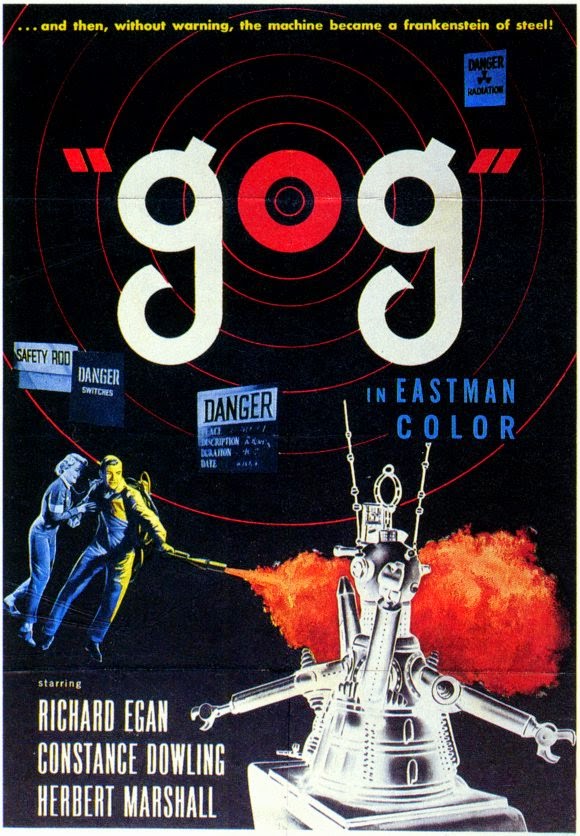 GOG hasn’t aged well. But to be fair, most 1950s science fiction films haven’t aged well. There’s something incredibly charming about older science films. The set design usually consists of giant walls of flashing lights, over-sized knobs and rows upon rows of buttons. The aliens, robots and monsters have become laughable relics of cheap practical special effects, the then-cutting edge lighting and sound effects have become punch lines. We’re use to better looking films, better acted films, films that don't operate as simplistic moral tales. The future the characters in these films lived in is the present we now inhabit. It’s difficult not to laugh at what they imagined the year 2000 would be or how they imagined future technology to look and behave.

GOG is on the lesser end of the science fiction spectrum, a movie all but forgotten these days. The simple story concerns a top secret military/science lab deep beneath the New Mexico desert. After two scientists are killed during a freak accident, a special agent, David Sheppard, is called in to investigate. Sheppard works for the Office of Scientific Investigation. His job is to rule out or confirm any possible sabotage. With the help of Joanna, an OSI agent already working in the facility, David begins his investigation. Soon enough, more “accidents” occur resulting in numerous deaths. David and Joanna come to the realization that an enemy airship, invisible to radar, is controlling NOVAC, the high tech computer that runs the day to day operations at the facility. Worse, NOVAC has switched on two robots in the facility, Gog and Magog, and has instructed them to destroy the whole damn laboratory by causing a nuclear reactor explosion.

Anyone familiar with the Bible will recognize the names of the robots, Gog and Magog. They represented powerful nations aligned with Satan, groups of fervent followers that would lead the final attack against the newly returned Christ and his followers. Sounds impressive but the robots here are little more than multi-armed, Dalek-esque contraptions that move at the impressive speed of 3 miles per hour. Far from the most terrifying creations ever imagined. But who cares, right? Watching these things slowly move around the labs, choking people to death with their metallic claws is all great fun. In fact, the final act of the movie makes up for the remarkable, breathtakingly slow pace of the first two acts of the film.

This is one of those films that contains scene after scene of people walking around a room while some scientist explains what every single knob and button does. It feels like a tour of a museum more than it does a film. And it never seems to end. Now, GOG is not a long movie. It is under 90 minutes long but I’ll be damned if it doesn’t feel like three hours goes by before anything happens. I understand it. I understand that these people were impressed by the sets they managed to build, but we really do not need to know what every single button in a room does. We don’t need to meet characters that have nothing to do with the story just so we can see yet another corny contraption. All we want are the robots.

JUST GIVE US THE DAMN ROBOTS

And thankfully, when we’re finally given the robots and given the suspense and given the race against the clock ending, everything works pretty damn well. Yes, GOG is little more than a “watch these brave Americans fight back and prevail over the dirty, stinking, godless Communists” tale of anti-science finger wagging, but it is still a charming relic of simpler days.
Posted by David Grant at 8:27:00 PM
Email ThisBlogThis!Share to TwitterShare to FacebookShare to Pinterest
Labels: 31 Days of Horror, GOG