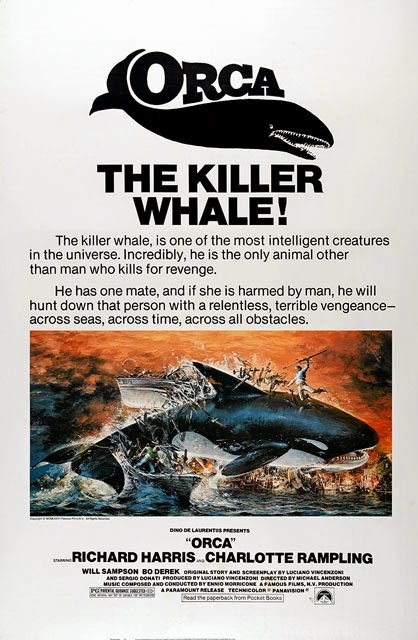 ORCA: THE KILLER WHALE is obviously a JAWS knock-off. That is an acknowledged fact. Dino de Laurentiis, the producer of the film, wanted a film that could not only match the power of Spielberg’s runaway success but top it. So what he needed was a marine animal large and strong enough to put a great white shark to shame. The animal chosen was a killer whale, an apex predator much, much larger than your average shark. The screenplay that was written for ORCA THE KILLER WHALE makes this point dramatically clear when within the first ten minutes of the film a great white is attacked and killed by a whale. This show of force captures the attention of a hunter named Nolan. Nolan sets out to capture a bull orca, spearing its pregnant companion by mistake. The dying orca miscarries and dies. And that, Dear Reader, is when ORCA: THE KILLER WHALE stops being a JAWS knock-off and turns into goddamn DEATH WISH.

After the death of its mate, the bull orca goes about terrorizing the village, sinking ships and breaking fuel lines. The massive orca knocks off several people in slasher movie style fashion, leaping up and dragging them off of boats. There is a strange attempt on the part of the filmmakers to get us to sympathize with the whale, even to cheer it on as it goes about biting off people’s legs and causing massive property damage. After Nolan’s crew drags the dying female on board the ship, it expels its dead fetus in a nasty spray of blood. The bull orca sees this happening and rears up, screaming. A later shot shows what appears to be a tear running down the orca’s eye. We’re told numerous times that killer whales mate for life, communicate like we communicate, have emotional bonds like we have emotional bonds, etc. Of course, all of this is true and that is why ORCA: THE KILLER WHALE is not a horror film. It’s a revenge film, through and through.

And it’s a surprisingly decent one at that. At the heart of the film lies two individuals (and yes, I am referring to the orca as an individual, a view the film seems to endorse), both effected by tragedy. We learn that Nolan, the hunter, lost his wife and child in a car accident. He shares some empathy with the orca and even experiences guilt over what he’s done. When the whale attacks his home (de-legging Bo Derek in the process), Nolan sets out to destroy the orca once and for all. Revenge can only lead to more grief, more tragedy and more useless loss of life. This idea that violence can only beget more violence is used endlessly in revenge films. It’s the single thematic string that connects DEATH WISH to LAST HOUSE ON THE LEFT to I SAW THE DEVIL. At the end of the day, we all become mindless beasts when we follow the road to hell.

Though ORCA: THE KILLER WHALE is generally derided as just being a quick knock-off, I actually find it to be a much more interesting film than its immediate inspiration. It certainly isn’t as good of a film as JAWS, but it sets its own path and earns its own identity. There are more than a few choice philosophical nuggets to munch on beneath the surface. It’s reasonably well acted, has a fantastic, haunting Morricone score and is executed much better than most made-for-quick-cash flicks. I genuinely enjoy the film and I think it deserves a much better reputation than it currently has.
Posted by David Grant at 11:28:00 PM
Email ThisBlogThis!Share to TwitterShare to FacebookShare to Pinterest
Labels: 31 Days of Horror, Orca the Killer Whale