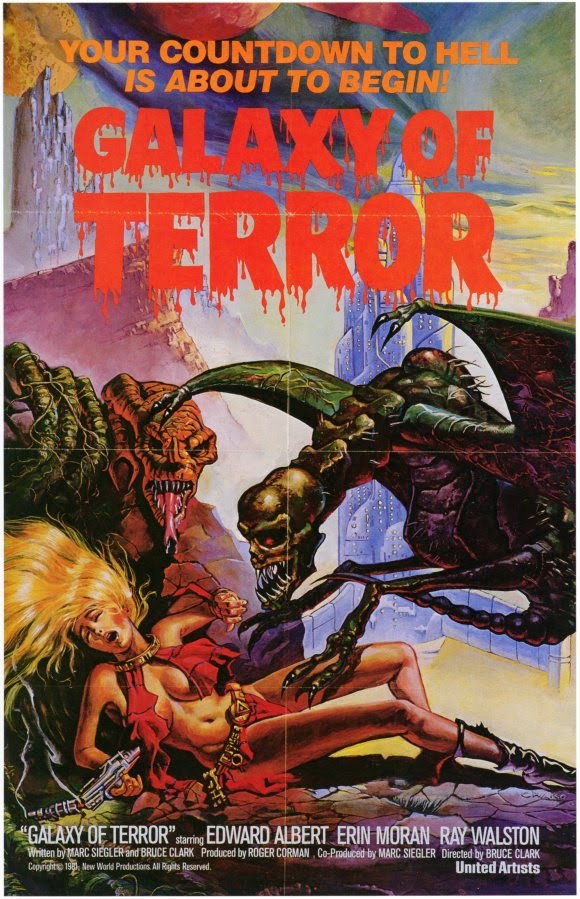 I’m not a fan of Ridley Scott’s ALIEN. It’s too stately and too pretentious for its own good. Like all of Scott’s films, the stiff British upper lip demeanor of the director infects the pulp plotline he uses and what that results in is a film that sure does look pretty, but comes across as a B movie desperately masquerading as a “real” film, or even at times, an art film. But really, ALIEN is nothing more than a slasher film set on a spaceship. That’s it. That’s all it is but that wasn’t enough. It had to be art designed to death. It had to be agonizingly slow. It had to ditch the inherent camp of the scenario in favor of aesthetic puffery. There are good qualities to the film but what ALIEN needed was a bit more lunacy, a bit more recognition of what it really is. Enter GALAXY OF TERROR, a 1981 Roger Corman production that apes the story of ALIEN but leaves behind all the fancy artistry and self-importance that dragged ALIEN down like an anchor.

When the order comes down to explore the shithole planet of Morganthus, your typical ragtag crew of workaday types set off aboard the spaceship Quest. We already begin to question the integrity of the mission when we meet several of the crew members, including the clearly crazy captain and the alpha male asshole mission leader. For the sake of exposition convenience, on board is a psychic named Alluma, a woman who gets to talk about “emptiness” and “darkness” and other boogedy boogedy boo-type scary stuff. Naturally, the Quest crashes down on the planet, a scouting team is put together and every one ventures off into the unknown in search of the remains of a failed previous expedition to the planet.

Then before you can say “where’s the remote?”, people start getting attacked by weird creatures both seen and unseen. Faces are ripped off, brains are exposed, disembodied arms hurl sharp crystals into chests, guts are spilled, immolations occur and a woman is raped by a large, slimy space maggot thing. And if you think all of that sounds a bit strange, wait until you hear the explanation for why all of this is occurring in the first place. I won’t spoil it for those who haven’t seen it (it’s so damn ridiculous that It deserves to be experienced unspoiled) but I will say that it takes this routine B movie schlock fest and takes it straight into Twilight Zone territory.

So is GALAXY OF TERROR a better film than ALIEN? Oh fuck no. But is it more entertaining than ALIEN? Most definitely. You would be hard pressed to find a more batshit insane sci-fi/horror mess than GALAXY OF TERROR. Simply put, this film is nothing more than a simplistic, high school level gore factory; a dirty, grungy, ugly piece of film that throws so much nonsense, coincidence and bullshit into its running time that it’s a minor miracle the movie just doesn’t explode when you put it in your DVD player. Dumb as a rock and not a damn bit sorry for it, GALAXY OF TERROR is a cult classic for a very good reason.

DAVE SAYS: Sorry for the short review. I didn't have internet for most of the day. Because it rained. And I have Comcast internet. And if anything happens - like if a bird farts - my internet dies. So blame the short review on Comcast. I had to finish the movie before I could write the review and without internet, how was I supposed to do that? HOW DAMMIT HOW? Anyway, I'll expand this later on. I have more to say.

Posted by David Grant at 11:39:00 PM
Email ThisBlogThis!Share to TwitterShare to FacebookShare to Pinterest
Labels: 31 Days of Horror, Galaxy of Terror