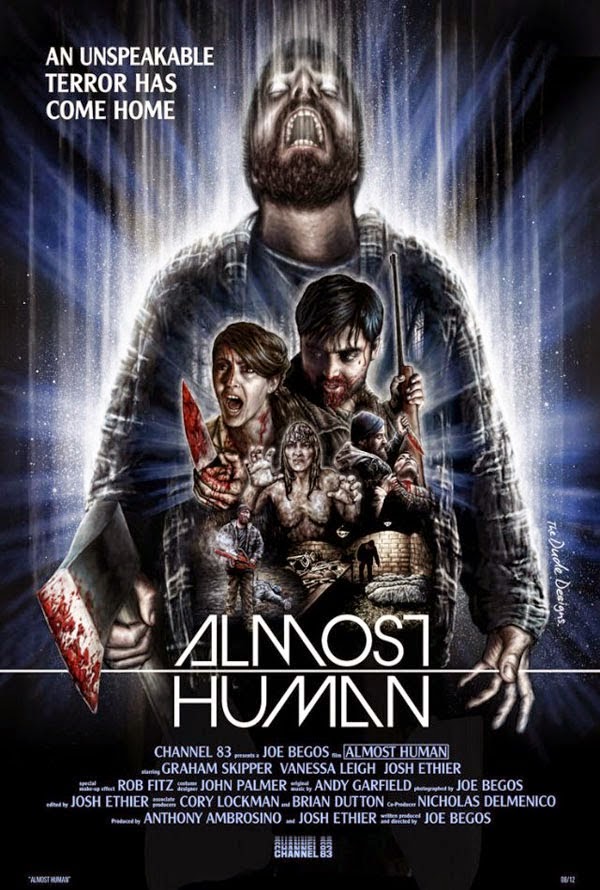 How great would it be if someone took all the best parts of XTRO, INVASION OF THE BODY SNATCHERS and FIRE IN THE SKY and put them all in one movie? It’d be fucking great right?

Here is ALMOST HUMAN, a movie that can barely even be called a movie. As it stands, this is absolutely nothing more than 50 or so scenes from better movies all crammed into the most underwhelming, poorly written, poorly paced, poorly acted piece of shit this side of whatever the fuck Troma movie you want to name. This is Tarantino Syndrome taken to the extreme, a film made by someone so enraptured in paying homage to the movies he loves that he forgets to include a single idea of his own. I’m not even kidding. There is absolutely nothing original going on here.

Seth witnesses his friend Mark being abducted by aliens. Two years later, Mark appears in the woods, naked. He kills two hunters and then proceeds to butcher a half dozen *ahem* characters before finding his ex, a woman named Jen. Meanwhile, Seth is inexplicably bonded with Mark through some kind of psychic… I don’t know… I DON’T FUCKING KNOW… and Seth decides to hunt down his old friend before Mark can complete his mission of raping Jen to

You know what? Who cares?

This movie is barely even worth commenting on. I cannot stand movies like this. I cannot stand movies that try to earn some kind of nerd cred by endlessly homaging better films. It’s like Joe Begos (the director, writer, editor blah blah blah of the film) thinks I’m going to say “holy shit! This scene is from JEEPERS CREEPERS! I LOVE THAT MOVIE THEREFORE I LOVE THIS MOVIE!” No, it’s going to make me want to turn your derivative piece of horseshit off and go watch JEEPERS CREEPERS. And I don’t even like JEEPERS CREEPERS. I don’t want to watch a greatest hits collection of my favorite scenes from other movies. I want to watch YOUR movie. But YOUR movie doesn’t really exist.

I could remake this movie in two days. No shit. I absolutely could. All I would have to do is round up all the DVD copies of the movies this hunk of trash rips off. Then a little bit of Fraps, a little bit of Premiere and voila! ALMOST HUMAN. At least those scenes would be better acted. No lead actor, who looks like Daniel Radcliffe with a three month old bowl cut, whose only facial expression resembles that of a child who just shit his pants in front of the entire class. No villain wandering around like he can’t remember what role he’s supposed to play. Hell, I wouldn’t even have to pretend that I wasn’t ripping off soundtracks whole sale and then calling it an “original soundtrack”. I mean, come the fuck on now.

Thankfully, the damn thing is only a little over an hour long. That’s right the 80 minute running time is a damn lie. At least 10 minutes of that are credits. But I’m not complaining. Because watching this movie is like spending 60 minutes stuck in a fucking elevator with your senile aunt, you know, the one that smells like cat piss, as she tells you the same stories you’ve heard for the past 20 years.